Last year Ashley and I were trying to figure out how we were going to get married.  We really just wanted to be married and didn’t want to make a big production of it.  Neither of us had the time or the desire to plan a big wedding, but of course there were people near and dear to us who didn’t want to see us run off to get married or just stop by the local courthouse one Friday afternoon.  So we made lists.  We made the small intimate wedding list – just local family and a couple very close friends.  Then we made the medium size list to include more family, the out-of-town variety, and more friends.  But as I’m sure those of you who have organized wedding know the medium size list has a way of morphing into the supersize list because it’s just impossible to figure out where to draw the line.  Mexico was the answer – we decided to break our mothers’ hearts and run away.

It isn’t easy to get married in Mexico we quickly discovered.  $800 to apply, blood tests that must be taken at a Mexican lab, and a minimum of 7 days spent in the country prior to the ceremony.  My guess is that there is probably a way around that for the rich and famous, but we didn’t have the time to pull it off.  We would need another plan.  We didn’t short ourselves the Mexico vacation, however, and figured taking our honeymoon prior to getting married was brilliant idea.

Then I believe that on June 9th of last year (a month or so after the honeymoon) Ashley and I decided a wedding didn’t have to be that complicated.  We could do it at home, we could plan it ourselves, and it wouldn’t cost a fortune.  9 days later we were married in our backyard with around 60 friends and family members.  It was perfect except that one of my sisters couldn’t come and bring her family on short notice.  We missed them.  The Reverend Colin T. Cotter mastered the ceremony.  The ink on his Universal Life Church minister card hadn’t dried yet.

I learned some interesting things about Arizona marriage law in those 9 days leading up to our wedding.  Did you know you can marry your first cousin in Arizona?  True story – but you have to be 65 years or older.  I think had I known that sooner I still would have chosen Ashley over holding out for a first cousin 27 years down the road.  Also the laws on who can officiate a wedding in Arizona are a bit foggy.  We had heard of people having friends or relatives officiate weddings but didn’t know how it all worked.  The law says the wedding official must be a licensed minister in some church.  Did that mean somebody could be ordained by the church of Dudeism and legally oversee a wedding?  We wanted to get married on our terms, but we also wanted to make sure it was legally binding.  Ashley sent an e-mail to the local office that would have the answer and they responded by phone.

We learned that in Arizona they don’t verify anything when they received the signed marriage license back in the mail.  As long as their are signatures on the lines for bride, groom, witness 1, witness 2, and wedding official then you are legally married once the document is filed.  You don’t need to have a wedding.  You don’t really need a licensed official.  Of course, we didn’t cheat the system.  For approximately $20 Colin did become a Universal Life minister.  Heck, he can even build a brick and mortar church if he wants.  I splurged and got him the wall certificate and wallet card.  Getting married in Tucson and looking for someone to oversee your wedding?  Colin is your man.  He is confident, well spoken, and showers most days.

I thought the funniest part about how we went about getting married was the actual visit downtown when we picked up our marriage license.  There would have to some red tape there right?  I mean how easy can it be to get the license?  WE DIDN’T HAVE TO SHOW I.D. to get our marriage license.  That’s right.  As soon as we left the office I turned to Ashley and said “Best practical joke ever – get two people married without them knowing.”  I mean how funny would that be if somebody went to get married and discovered they already were?  I actually did show my I.D. to the clerk who gave us our license, but only because I paid by credit card (yes – I’m old fashioned like that – marry me and we don’t go dutch – I picked up all $72).

So there you have it:  9 days of planning, one ordained brother, $72, a beautiful yet inexpensive wedding dress (Yes – she wore a dress!), some catered Greek food and we were married, and most importantly a life time to look forward to sharing with my bride . . . priceless. 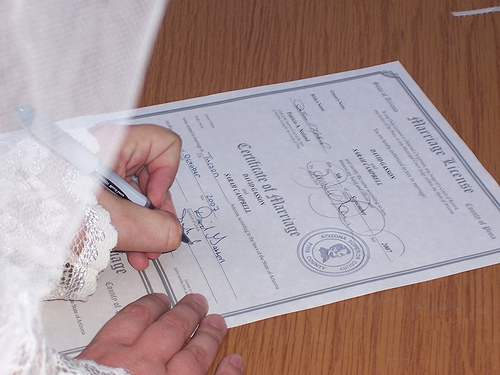