Ashley and I got married in June.  We met on Match.com.  In my book I shared our Match.com story.  Match.com caught wind of it and they contacted me.  Check out the t-shirts they sent us.  If you find love on Match.com you too can get Match.com t-shirts.

Online dating is an interesting phenomenon.  Truth be told I used to look down on it – of course then I was married.  Heck when I dated the internet didn’t exist in a form like it does now.  But I used to think that people that needed the internet to find love must be flawed.  I was wrong.  After my divorce in 2009 I wanted to get back out there, but wasn’t in a position where I had all sorts of free time to dedicate to that cause.  I decided to give the internet a chance and after a short amount of time on a free internet site I decided that a small investment might be justified.  I figured $30 would guarantee no correspondence with people just screwing around and I bought 3 months of everything Match.com had to offer.

Every few nights I checked out the local ladies.  I sent a few messages and winked at some that caught my eye.  Yes – one can wink on Match.com.  Ashley says winking is lame and is probably right.  Her position is that a simple note is far cooler than a wink.  No effort is required for a wink.  You pick the person, click “wink”, and they are notified of your interest.  She says she paid no attention to winks she received.  Now that I think about it few women I winked at ever acknowledged my winks – and I think I winked at the majority of single Match.com women in the Tucson area.  Perhaps she is right – the wink is probably lame.  Anyhow . . . I was on Match.com winking away and went on a few Match.com dates that were busts.  After a few weeks I decided Match.com wasn’t for me.  However, I had prepaid for 3 months, so I still received the occasional message from women in pursuit of me.  Oh did I receive messages over those couple of months (at least 2 – including Ashley’s).

Ashley claims I was the only guy she hit on.  Her story is that she signed on the Match.com half-heartedly and turned down lots of guys in town.  According to her all of them were topless in their profile pictures.  Apparently my Tucson competition liked to show their chests.  I don’t doubt she had a lot of suitors.  She also claims I was the only guy she ever reached out to – not with a wink but a message.  I showed up in her daily 5 I believe.  When you sign on to Match.com they send you a message every day with 5 people they recommend for you.  Even though I was outside of Ashley’s specified age range (I was 36 at the time and her cutoff was 35 – lots of women make their upper cutoff 35 so if you are a guy 36 or 37 lie and say you are 35) she found me so irresistible that she sent me a note.  That’s a believable story the way I see it.

I’m telling this story like it all makes sense to me.  It doesn’t.  I got lucky.  I could not have predicted in a million years that I could meet a woman like Ashley on Match.com.  I reflect at times and have a hard time believing how this all played out.   After Ashley messaged me we corresponded for weeks before we met.  It’s crazy but I felt like I had a very good sense of who she was before that first date – a date that ended with a high five (I don’t waste any time).

Now we are married and are busy taking care of our perfectly blended family.  It didn’t start with a wink, and I can’t believe this is the case, but I have Match.com to thank for helping me find Ashley . . . or helping Ashley find me.  Technically she found me. 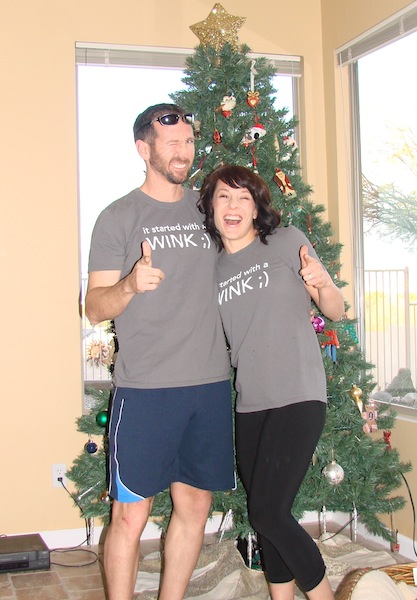