I received this e-mail this week from my neighborhood association.  It is just too good to keep to myself.  I essentially live in a retirement community in the Tucson suburbs.  90% of the homes in my neighborhood are owned by retirees with small fancy dogs.  Watch out for the guy walking my neighborhood with his hunting knife.

“Hello All,
Attached is the April Newsletter.

Also a concerned owner asked that I forward this email to all of you.


I want to report an incident that happened to me on Sunday, 2-05-12, around noon.  I was walking my little dog on in our subdivision.  As I walked eastbound on the South side of the street, I noticed two medium sized dogs running north across the street from the south side into an open gate of a fence.  I don’t know who the home belongs to.  As I continued to walk on the sidewalk on the south side of the street, I saw the two same dogs running from the same gate straight toward me at a high rate of speed.  I quickly picked up my little dog that was on a leash to prevent the dogs from attacking her.  I heard a lady from the home yell at the dogs from the inside the gate.  I tried to kick one of the dogs behind me but missed.  My dog dropped to the sidewalk and lost its leash.  The two dogs ran as I tried to kick them but my little dog was about to run after them.  I quickly reached down into the sidewalk and grabbed my dog before it ran off.  I badly scrapped my right knee when I hit the sidewalk.  The two dogs ran back inside the gate where the lady was standing.  She asked me if I was alright.  I responded to her that she’d better keep those dogs inside her yard with the gate shut.  She closed the gate.  I also yelled at her from across the street that I don’t want to hurt her dogs but I will next time.  Then she went into her house.

I could have killed those dogs running at me; I could have sued the lady for my injury; I could have called the police and animal control but I didn’t.  I treated my large knee scrape at home.

About a month ago, I was driving in the neighborhood and I saw a medium sized dog walking very slowly.  I stopped my vehicle to see if the dog was injured.  I noticed the dog had a tag around its neck.  The dog wasn’t hostile.  After trying to examine the name and address on the collar, the dog got up and ran off into a side street.

Please warn residents that some of their dogs are on the loose in the streets and they may attack other small dogs or people.  These loose dogs might also get attacked by javelinas, bobcats, mountain lions, coyotes, or snakes.  From now on I will be carrying a big fat stick and a hunting knife to defend my pet and ward off any attacks.  I suggest Cadden Management write an article in their newsletters warning residents to keep their dogs leashed or inside their property lest they open themselves up for a big lawsuit.  I don’t want to get treated for possible rabies.  I advise Cadden management to levy heavy fines to residents who don’t have the common sense to keep their dogs from running around in the neighborhood.  I also advise Cadden Management to avoid any lawsuits themselves for their failure to regulate loose dogs from endangering pets and people at Monument Vista.”

There you have it.  Exciting news from my hood. 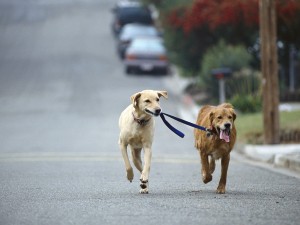