I still have my wedding ring sitting in a drawer in my kitchen. It’s gold but I’m under the impression that it’s not worth very much even though gold is worth something like $1300/ounce these days. I haven’t put any thought into to what to do with it but I got an e-mail recently that has me thinking . . .

This guy ended up with his ex-wife’s ring after their divorce. I applaud his creativity and I think he got a really good deal. I have to think that was some tasty grub he enjoyed after making a trade. He chose to remain anonymous but shared with me his unusual way of getting rid of his ex’s ring:

“I was really hungry 1 nite, so I traded my ex-wife’s $1500 wedding ring for a Family Bucket of KFC. I was so pleased with myself that nite….the young girl at the KFC counter eagerly took my offer. You may think I got ripped off, but I insisted on the FAMILY Bucket Meal….not only did I get 15 pieces of Extra Crispy Chicken, …I got Coleslaw, Potato Salad, Gravy, …AND a box of French Fries. I think I made an excellent trade.

(Advising me if I want to try to make a chicken trade for my ring)  You may have to hit up the manager, though,…as when I went up to the counter the 2 young girls were hmmm’ing & huh’ing……thought they’d say no….not sure who actually GOT the ring…..but they giggled & said to each other, after I explained the ring means nothing to me,…they told each other …”yeah, we’ll take it…if the ring is not worth the $29 of the Family Meal (or so?) we’ll eat the cost between ourselves.”……I think b/c there were TWO of them, they discussed it briefly between themselves, & thought …what the heck”

I really like getting these sorts of stories.  I cracked up when I read this one and it helps validate my position that I’m not insane for using my ex’s dress in a bunch of strange ways.  Feel free to e-mail me at myexwifesweddingdress@gmail.com. 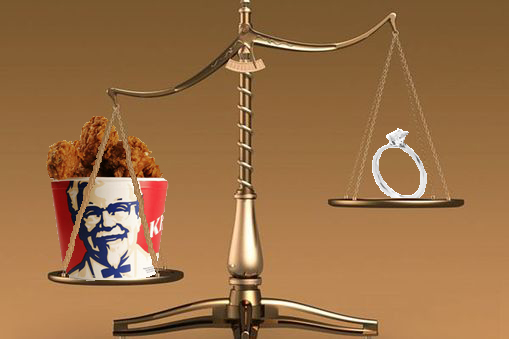